What Is the Endocannabinoid System (ECS)?

The endocannabinoid system (ECS) got its name in the late 1980s when researchers studying cannabis discovered the complex cell-signaling system inside the body. To better understand that cell-signaling, it’s helpful to understand homeostasis. Homeostasis is essentially your body’s efforts to keep its internal processes in balance regardless of what’s going on around you.

Similar to the instrument panel in an airplane or the dashboard in a car, your body continually monitors and adjusts various levels and functions like your heart rate, body temperature, fatigue, hormone levels, and more. When one of your levels goes out of normal range — like when you are hungry or really hot — your body signals your ECS to bring it back to normal.

While scientists still have a lot to learn about at the ECS, there is increasing evidence that it helps to regulate a wide variety of functions, including: sleep, mood, appetite and digestion, stress, pain, immune system, and more.

ECS is made up of three main parts.

Cannabinoid receptors, endocannabinoids, and metabolic enzymes comprise the ECS. Each plays a crucial role in helping the body maintain homeostasis. 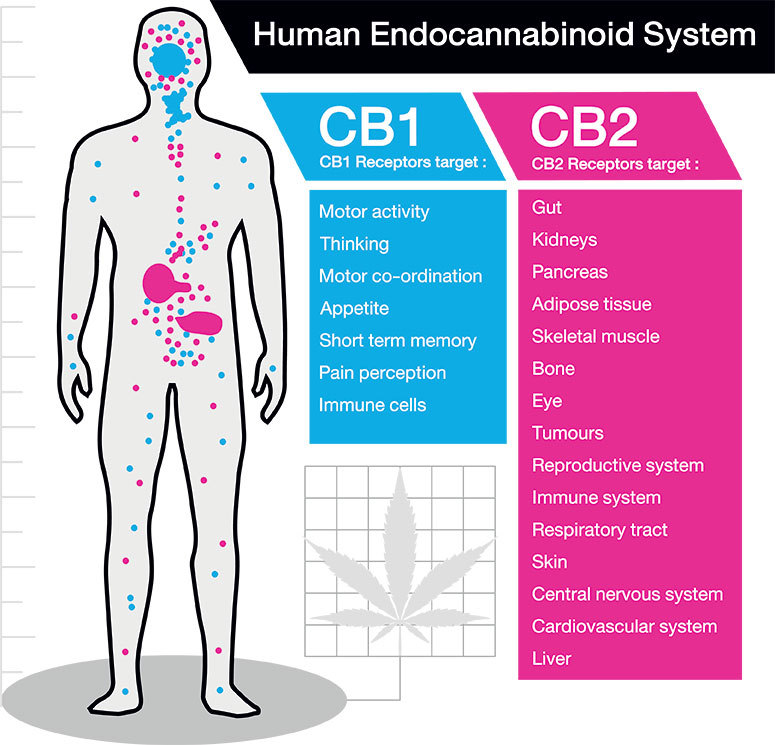 Cannabinoid Receptors — Found on the surface of cells, these receptors monitor and communicate information about conditions outside the cell to the inside of the cell. This transmission sparks a cellular response.

The highest density of cannabinoid receptors are found in the brain and regulate brain functions such as pain signals, wake/sleep cycles, body heat control, appetite, memory, and control of energy homeostasis. These receptors are NOT in the brain stem, which regulates involuntary functions like heart rate and breathing. This is why there is no lethal overdose for cannabis.

There are two main endocannabinoid receptors:

Endocannabinoids — These are small molecules or “keys” that “unlock” or bind to the CB1 and CB2 receptors to produce numerous physical benefits. The two major endocannabinoids, anandamide and 2-AG, are produced naturally and used by the body exactly when they’re needed.

Metabolic enzymes — These enzymes, known as FAAH and MAGL, help endocannabinoids get used when they’re needed, but not any longer than necessary.

How THC and CBC affects the ECS.

The euphoric and medicinal effects you experience from cannabinoids like THC and CBD are produced when they interact with your body’s ECS.

For example, when you smoke THC, the cannabinoid attaches to the CB1 receptor in your brain and makes you feel high. Naturally produced anandamide can also activate CB1 and produce a calming effect. However, the metabolic enzymes that quickly break down endocannabinoids like anandamide don’t work on THC, allowing it to remain in your system much longer. This produces THC’s euphoric effect, as well as potentially producing other benefits like stimulating your appetite and alleviating pain.

Researchers aren’t sure exactly how CBD interacts with your ECS, but they do know that it doesn’t bind to the CB1 or CB2 receptors the same way THC does. It can, however, impact the overall levels of endocannabinoids in your brain, also known as the “endocannabinoid tone.”

One way it does this is by blocking the FAAH enzyme, which breaks down anandamide. This allows endocannabinoids to have more of an effect on your body, which can be beneficial for people who are dealing with anxiety disorders, as well as pain, nausea, and numerous other conditions.

The more scientists study the endocannabinoid system, the more they will learn how to target specific cannabinoid receptors to provide exact treatments for specific conditions.