Anatomy of the Marijuana Plant

Although you may be familiar with the marijuana buds that we covet, many people have never seen a marijuana plant, let alone know about its anatomy. The cannabis plant is made up of many different structures and this post is meant to provide a brief introduction to the main parts of this amazing plant.

Cannabis flowers (a.k.a. buds) are the most well-known part of the cannabis plant. The cannabis plants will either have female or male flowers, and the flowering process is how a grower discerns whether the plant is female or male. A flowering female cannabis plant will develop a cola and grow buds. It will also produce cannabis seeds if it is fertilized by a male marijuana plant. The flowering male plant does not have buds, but develops small pollen sacks at the base of its leaves. Pollinated plants are far less rich in cannabinoids (like THC) so the buds you purchase and enjoy are always unpollinated seedless females. 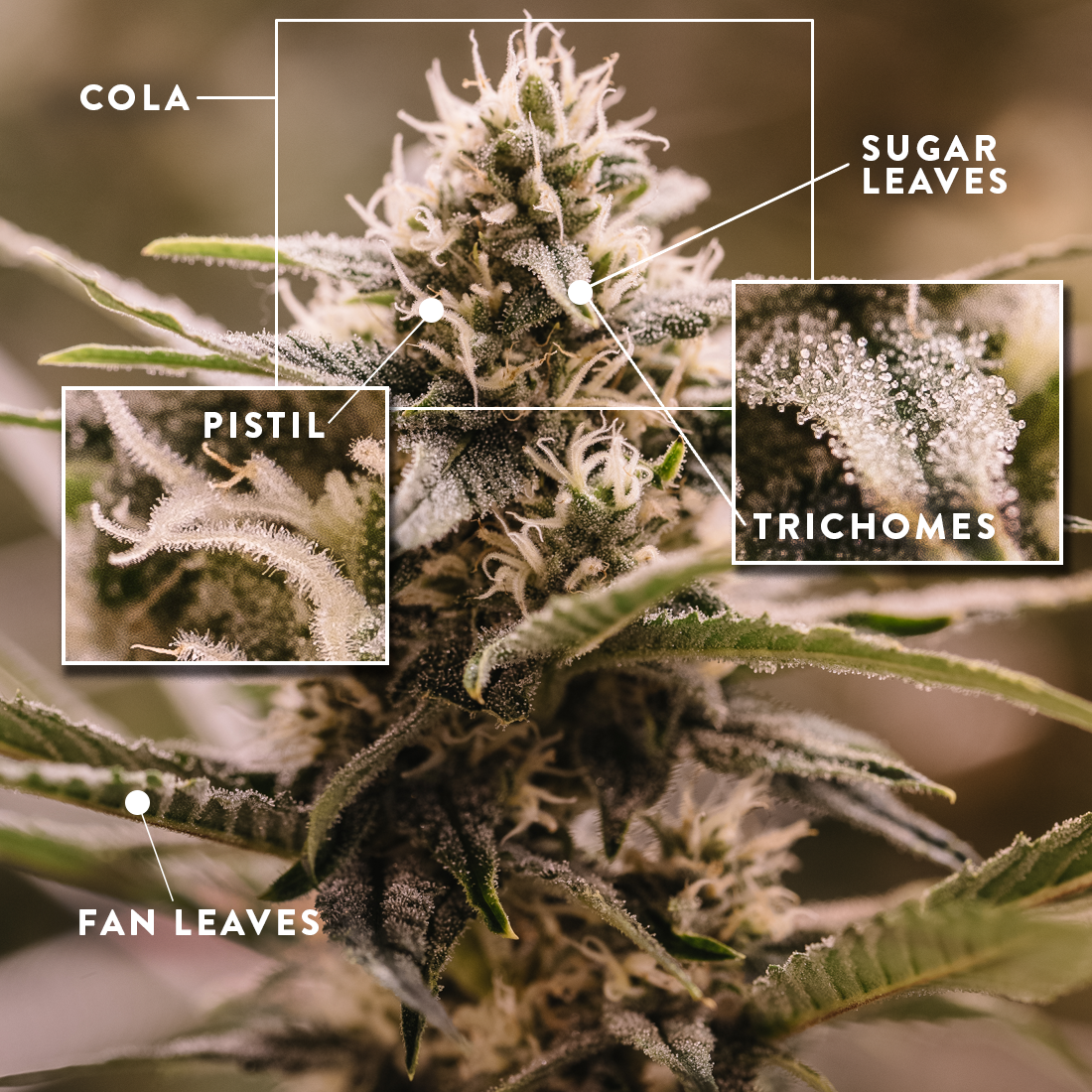 Fan leaves are the large, protruding leaves that appear up and down the plant. Each leaf usually contains five individual leaves, but sometimes have more. Photosynthesis is the main function of these striking leaves, and they don’t produce high levels of cannabinoids like buds do. But even though they aren’t smoked, they are famous for being an iconic symbol of the cannabis plant in marijuana culture.

The cola refers to the part of the female cannabis plant where the buds come together at the tip of the stem. The quality and size of the cola can be increased during the growing process with plant training, which means physically manipulating the plant so it grows more bud sites, which increases yields. The cola produces the largest, densest buds with the highest potency. When you buy top-shelf flower, you usually get buds from the cola that have been hand-trimmed.

Often hidden under the small leaves on the cola, are tear-shaped nodules that form the bract. The bract encapsules the cannabis female plant reproductive parts and is covered in resin glands that contain the highest concentration of cannabinoids. The calyx is a translucent layer that covers the female plant’s ovule enclosed by the bract and is not visible to the naked eye.

Sugar leaves are the small leaves that grow out of the buds. They are often hidden, with only their tips peeking through. They are usually covered in trichomes, which give them the appearance of being dusted with sugar. Because they carry cannabinoid-rich trichomes, they can be used to make concentrates and extracts.

Trichomes are a tiny but essential part of the cannabis flower. These resin glands coat the flower and look like translucent crystal-like globes. Trichomes are rich in cannabinoids and terpenes, which are responsible for the euphoric and therapeutic effects of the plant.

Pistils look like tiny hairs that grow out of the sides of the flower. They start out white but turn to red, orange, and brown. Only female cannabis plants have pistils, and they function to capture pollen sacs from male marijuana plants.